Project applications are now on the user and device details pages, plugging an important gap in the project information available in the Evergreen UI. Application associations within a project are a key piece of information for project administrators, and previously users had to return to the legacy UI to find these. The fact that these are now in the Evergreen Details page creates a smoother user experience. The reports section of Evergreen has arrived, and the first report available is for Bulk Updates which have been performed. Lastly, in small but psychologically important shift, the default page for the Dashworks application is now Evergreen rather than the legacy UI. Evergreen Details for both users & devices have an additional page of Project Apps under Applications. This shows the applications associated to the user or device within the chosen project. Similarly to the legacy UI, there are options to see the current apps, the target apps or both of these side by side. In this version the information is read only, with enhancements to enable you to edit readiness and association coming soon.

The bulk update report is the first item in Reports. Here you can check if bulk updates that you have performed have succeeded or failed. The results can be sorted and filtered with more detail of the bulk update itself and the batches of objects, available when drilling down. Currently only bulk updates for the logged in user are shown.

Simplified Self Service for Application Owners 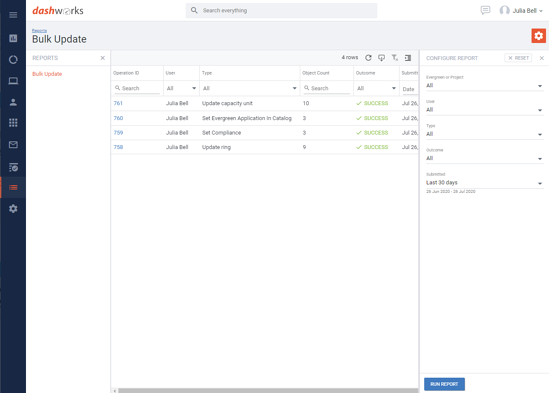