Dashworks 5.4.9 comes with some big new features that collectively make the Evergreen user experience much more functional. Favourite Bulk Update will make a huge improvement in productivity for anyone who frequently updates data in Dashworks. In a breakthrough in bringing the functionality of the legacy UI to Evergreen, you can now click through on pivots to the underlying data. This truly brings to life the concept of starting at a very high level view and drilling down to the lowest level of detail. Device filters on the Users list are another of Dashworks' very useful “double hop“ filters that allow you to filter users on a property of a device they own. 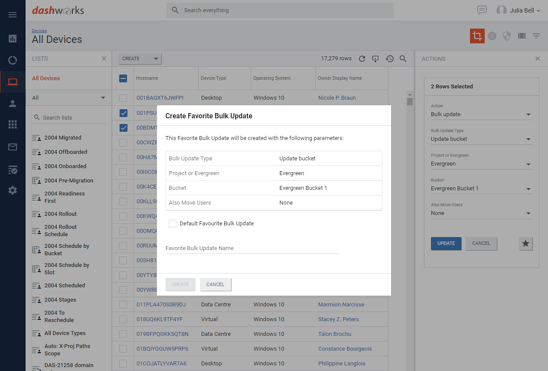 When performing a Bulk Update, you can now save it to use again in the future. You can save all of the parameters or some of them, giving you the flexibility to leave some parameters open to select when you are using it. This is available when bulk updating paths, tasks and custom fields, with other Bulk Update types coming shortly. 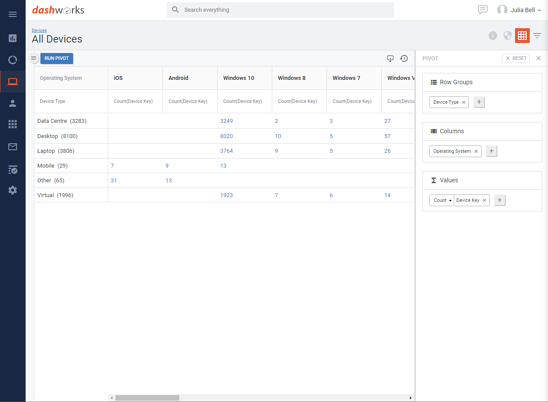 Reporting on Evergreen data is really flexible, with an extensive list of filters and columns to choose from, along with ability to aggregate any of these into a pivot table. The missing piece of the jigsaw was to link an aggregate number in a pivot to the data behind it, as you can do in the (much more restricted) reports in the legacy interface today. This functionality is now here, meaning that the combination of Dashboards, pivots and lists give you your data in a connected, highly customizable way. An example of how to use this, is to create a pivot that counts devices, with Device Type on the row groups and Operating System on the columns. If you click on the number in the Windows 10 column and Laptop row, you will be taken to full list of all your Windows 10 laptops, where you can add additional columns and filters. 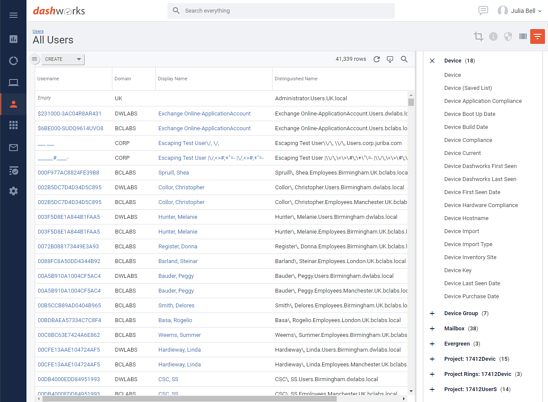 A new category of filters on the users list enables filtering of users based on the properties of the devices they own. For example you can create a list of users who own a device in a particular hardware inventory site or are Red for compliance. In this category is also the Device (Saved List) filter which allows you to filter users down to those who own a device in any device saved list, giving you access to the full set of filters on the Devices list, not just those available in the Devices category on the Users List.