Self service sees the first glimpse of some important new functionality this month with date tasks on devices. I’m really pleased that we have been able to launch this with full capacity functionality in place. Tasks are the beating heart of a project and over the coming releases we will be also be introducing them to apps, users and mailboxes, along with date & time, text and select tasks. There is also enhanced functionality for tasks that takes these beyond the native capabilities of tasks in legacy self service to include features such as aliasing, read only and mandatory tasks. Evergreen details pages now have audit history visible, nudging the details pages ever closer to feature parity with the legacy UI. Importantly you can see the Evergreen audit history here which is not available in the legacy UI. Finally the latest addition to bulk update and automations is Send Email Now. 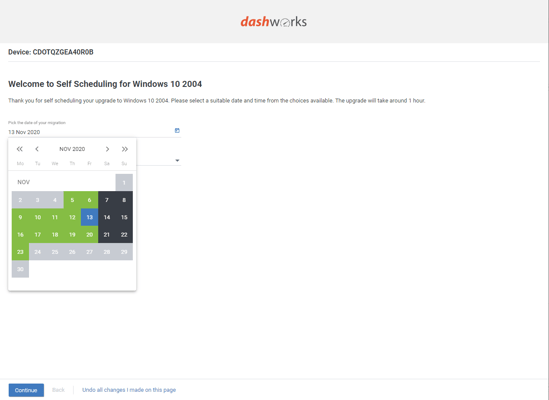 Evergreen Self Service now has date tasks available for devices. This includes the capacity and slots feature. This functionality allows end users to self schedule their device for OS upgrades, hardware replacements or other maintenance tasks. Capacity can be set and is shown in a way that is easy to consume through colours on the date picker. The task name can be aliased so that the end user sees a different name to that set up in the main Dashworks application. 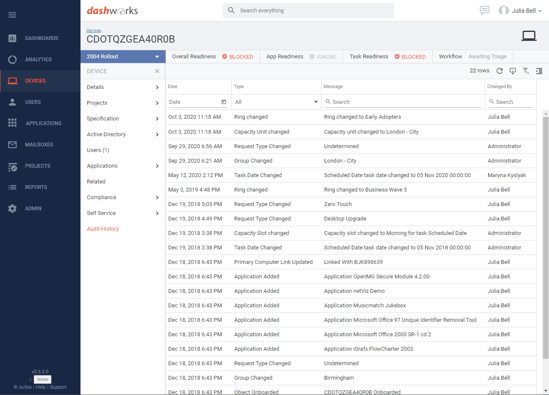 There is a new page on Details for users, devices, apps and mailboxes called Audit History (DAS-22121). This shows the audit records of all changes that have happened to an object. This page includes the audit history for Evergreen operations, which cannot be viewed in the legacy UI. 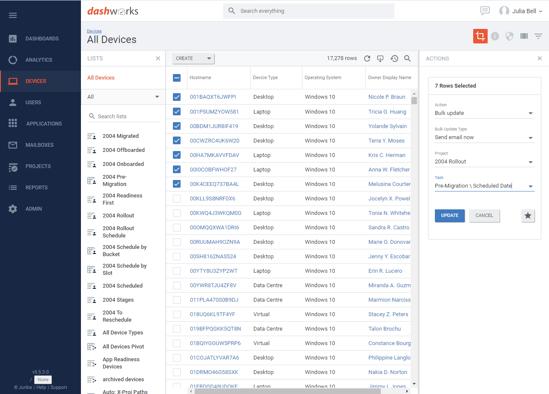 The latest addition to bulk update and automations is “Send Email Now“. Using this feature you can resend emails to users in bulk who may have missed it the first time around. This is useful to communicate details of upcoming changes or to invite them to use self service.